You are here: Home › Archive › Schools › News › From The Streets To The Stage The Interview Part 2

From the Streets to the Stage: The Interview [Part 2] 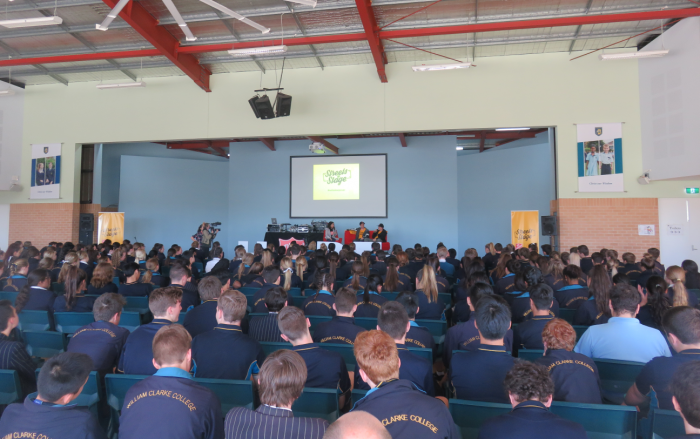 The 2016 tour has just concluded, you can read more about it here. The performance featured a Q & A with the two musicians Ozone and Supernal about their youth homelessness experience. This blog is part two of a three part series* of the Q & A facilitated by guest MC Bee Orsini at William Clarke College on the 29th of July.

So if you were sleeping rough and you’ve dropped out of school – what were your job prospects like?

Supernal: "Yeah, drugs were a really easy thing to fall into because friends that were going through pain – my friends that didn’t understand - I couldn’t put that on their shoulders because they’re not getting paid to be psychologists and psychiatrists - I had friends that were going through pain and could relate but they all did drugs and it was a vicious cycle. It was like putting a band aid on an infection, it doesn’t fix the problem, it just gets worse and eventually something’s got to be done…like a leg has to be amputated so it was crazy. What was important – you hear it in one of my tracks ﻿Live Hard, Move Forward: 'it’s hard to lose a father, I lost mine in '08. He had a car accident driving home late. The family was inundated by a tidal wave of loss, losing the man of the fam came with a big cost' - was instead of doing drugs to release and to mask the pain, I learnt through music to release and one of my quotes “I’ve learnt to turn pain and misery into creativity” so music is a pretty powerful therapy I think."

Did you ever think you would end up experiencing homelessness before you did?

Supernal: "I hate that stereotype. I think to myself ‘who in their right mind' – I don’t know about you guys but when I was at school, I left just at the end of year 9 but I didn’t want to and I look back and I wish that I stayed there – but who in their right mind goes 'hey when I grow up I want to experience homelessness and I want to be addicted to drugs?'. I don’t think that anyone would just want that because it’s a place you find yourself stuck, not knowing how to get out because of lack of support."

Ozone, eventually you got support through the Salvos. What motivated you to start that journey?

Ozone: "I don’t think I wanted to reach out and it wasn’t until I completely hit my worst, hit rock bottom. I was completely drug addicted, doing crime and just wasting my life away basically. I got arrested and a social worker recommended me to Oasis – a Salvation Army youth support network and when I went there, that’s when I finally accepted some help. I finally spoke out and discussed with the workers what was happening with my life. I wish – I really, really wish I got help before that because things could’ve turned around a lot quicker."

In terms of recovery, you said before you were using drugs and got arrested – what are some of the things you did in that recovery stage?

Ozone: "Musicians Making a Difference came to Oasis and they ran a music workshop there. I always liked music. I used to sing along to Eminem and Tupac songs so I already liked it but I went there and wrote a song, recorded it and when I played it back, it just hit me. I just sat back and I thought - I would look around on the streets and see 40 to 50 year old people still living on the streets, still doing drugs and I didn’t want to do that – I wanted something more for myself so I just kept writing music and that’s what made the change. After a while, I went up to Goulburn and I got off drugs and alcohol, got myself completely clean then I got out of Sydney and just kept making music, kept bringing my life back up."