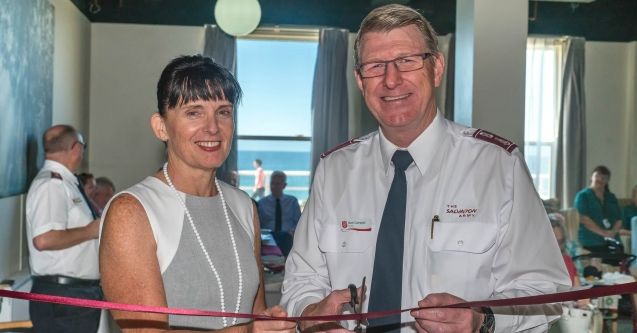 The Salvation Army’s Carpenter Court Aged Care Plus Centre in Merewether has been officially reopened following repairs to damage caused during storms in April last year.

Colonel Mark Campbell, The Salvation Army's Chief Secretary, cut the ribbon to mark the reopening on 13 February. Residents and staff were evacuated to another Aged Care Plus Centre after storms damaged parts of the complex last year. After several months of repairs, residents started moving back before Christmas.

At the re-opening ceremony, team members from The Salvation Army and Aged Care Plus, along with residents and their families from Carpenter Court Aged Care Plus Centre, were joined by Aged Care Plus CEO Sharon Callister and Centre Manager Joanne Teerman.

“We are proud to have our Carpenter Court Aged Care Plus Centre residents settling back into their home in Merewether,” said Sharon.

Led by Centre Manager Joanne Teerman and her compassionate staff, the centre offers care and services for people in a supported environment, who are more independent and require some assistance with activities for daily living.

The centre offers specialised care and services for residents living with mental health issues which was recognised by the Australian Aged Care Quality Agency's Better Practice Awards in 2014 for improving the health and wellbeing of residents through behaviour support plans.

“I have the freedom to continue to live my life my way while receiving the care and support I need. The staff are like family and I feel incredibly lucky to call this home,” said Greg Magill, a resident at the Merewether centre.