This Anzac Day, as many gather at the rising of the sun to remember those who sacrificed their lives for us, what happens to veterans who are all alone, or without a home? Shockingly, of the 116,000 Australians who were homeless in 2018, 1 in 20 were Australian Defence Force veterans.[1] Corporal Walter ‘Wally’ Raymond Buckland, an only child with no surviving next of kin, could have easily fallen through the cracks, but thanks to a handful of loyal and loving friends, Wally will not be alone this Anzac Day. Instead, he will be celebrated, at his home, The Salvation Army Gill Waminda Aged Care Centre in Goulburn.

Wally was born in Goulburn and began his service career aged 27. During his first tour of Vietnam, he was part of the Anzac force at the Battle of Long Tan in 1966. This three-day battle saw the highest number of Australian casualties of any engagement in the Vietnam War: out of 105 Australian troops, 17 Australians were killed and a further 25 wounded, one of whom later died of wounds. Wally lived to tell the tale.

Yet while Wally can still recall stories from long ago, dementia – which is more common in veterans than non-veterans[2] – means that he struggles with short-term memories like day-to-day events. 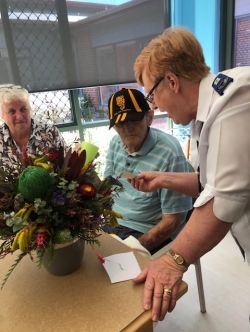 Wally no longer has any family to share his remaining memories with but he has an abundance of friends. In addition to old friends and former Goulburn neighbours, Wally’s other visitors have included cadets from the Long Tan Company at Duntroon, serving and retired army officers, members of the Veterans Motorcycle Club, Long Tan veteran Bob Tetley, who mounted Wally’s medals for him, and former major general and current New South Wales Senator Jim Molan AO, DSC.

Kerri Hartney, manager of The Salvation Army centre where Wally lives says, “It’s been great to see Wally celebrated by the community, and to see him receive the recognition he deserves. He is well loved by our staff, too.” This Anzac Day will be no different. Wally will be in the comfort of his loving home with The Salvation Army, most likely attending an Anzac Day service, surrounded by old and newfound friends, cadets from Duntroon’s Long Tan Company, doting staff and his loving dog Kelly.

Wally – and his service – has not been forgotten.

[1] The State of Homelessness in Australia’s Cities, Centre for Social Impact, 2018
[2] The Impact of War Experiences on Dementia in Veterans, Department of Veterans Affairs, 2012