Find out more
You are here: Home › About Us › News & Stories › Disasters Other Appeals › Salvos Response Major Bushfire Nsw Qld 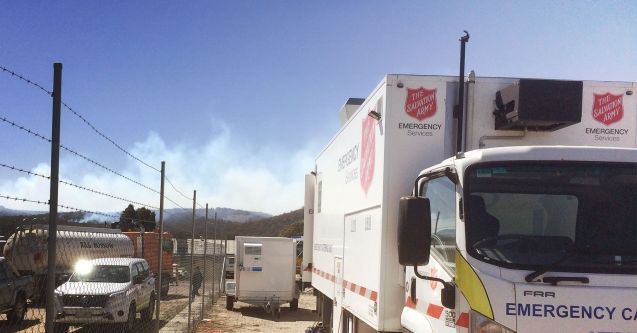 The Salvation Army is supporting fire-fighters and affected residents at the scene of major bushfires still burning out of control in New South Wales and Queensland.

The Salvation Army are working together with Woolworths to respond to the fires. In northern New South Wales, Tenterfield Salvation Army Emergency Services (SAES) teams have been working hard since last week, feeding Rural Fire Service volunteers and people presenting at the evacuation centre.

Teams from Coffs Harbour have been at Dorrigo Showground all weekend, feeding fire-fighters and evacuees. In southern New South Wales teams from Bega assisted at an evacuation centre that was set up at Bermagui Surf Life Saving Club.

Local Woolworths stores have helped the Salvos with supplies, meaning that they are well equipped with enough food and water.

“This is not a pre-curser to the fire season,” said Strategic Emergency and Disaster Management Coordinator NSW/ACT, Norm Archer. “This is the fire season.”

“I am humbled and blown away by the willingness of our volunteers to step up both in times of crisis and also supporting community events as best they can,” said Norm.

In Queensland, Salvation Army Emergency Services teams from Warwick/Southern Downs, Fassifern, Toowoomba and even volunteers from Brisbane have been working hard to support Queensland Fire and Emergency Services teams at the fire staging area. Strategic Emergency and Disaster Management Coordinator, QLD, Adam Cole said hundreds of meals have been served every day since last Friday: “We’ve been working hard, the guys are doing the best we can to ensure that the firefighters are supported and fed and just having that physical support there.

“It is very, very, early for this to be happening. The reality is, the drought is exacerbating the situation. We are seeing fires that I’ve not seen before, so it’s very, very concerning for the season.”