You are here: Home › About Us › News & Stories › Disasters Other Appeals › Salvation Army Given Extra Responsibility In Nepal 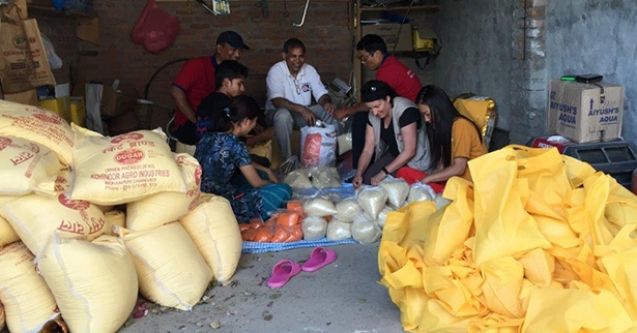 The Salvation Army's international emergency services team in Nepal has been offered the role of managing some camps in and around the capital Kathmandu.

The Camp Coordination and Camp Management (CCCM) team has been appreciative of The Salvation Army's relief work in the aftermath of the earthquake which hit Nepal on 25 April, killing 7366 people and injuring 14,500.

The CCCM team leader said he remembered being impressed with how The Salvation Army coordinated relief work in a large camp in Port-au-Prince following the Haiti earthquake of 2010, which killed nearly a quarter of a million people and displaced nearly two million people.

Meanwhile, Salvation Army workers continue to assist at various distribution centres in Nepal, particularly in the Durbar Square Camp which hosts about 1200 people (100 families). The camp is in Bhaktapur, next to an ancient city – listed as a World Heritage Centre UNESCO – which used to have beautiful palace courtyards, temples, wood, metal and stone artwork.

Food and water packets are continuing to be distributed, although many families are choosing to return to their partially damaged homes or to friends and relatives. The packets contain 2kg of rice, 0.5kg of dhal, 250ml of oil, 50g of salt, 10 packets of noodles and five litres of water.

An assessment team has now returned from a three-day trip to the northern Sindhupalchok region, where it visited eight villages, none of which were accessible by road. During the trip the team walked almost 70km, sometimes reaching an altitude of nearly 3000 metres.

The team reported that around 90 per cent of the houses in the areas were damaged. “The potato harvest is still a couple of months away, so the most urgent needs are for food and shelter,” one worker said.

A major distribution is planned for tomorrow (Friday 8 May), when 225 families from four villages will be given food (rice, dhal, oil and salt), tarpaulins and ropes. The distribution will take place at a central resort, meaning that some of the families will have to walk for up to three hours to claim their goods before carrying them home. The only way to reach the remaining four villages is by helicopter, which the team is now trying to arrange.

One piece of particularly good news from Nepal is that The Salvation Army's cafe/beauty salon, “Sisters”, has been able to reopen. The cafe and beauty salon provides training and income to women who might otherwise not be able to find employment. The reopening of the venture is seen as a great answer to prayer, after Salvationists and friends from around the world prayed for the project during last week's Worldwide Prayer Meeting.