Find out more
You are here: Home › About Us › News & Stories › Disasters Other Appeals › Emergency Response Townsville With three of the four Townsville evacuation centres now closed, and more and more people able to return to their homes, The Salvation Army’s response has shifted to recovery mode in North Queensland.

“Slowly people are starting to be able to go home,”said Queensland Divisional Commander, Lieutenant-Colonel David Godkin. “But some of them are going back and having a look and realising that they can’t live there. The Salvation Army is moving into its recovery phase of assistance where we will work with those people to try and find some accommodation for them until their homes can be fixed up.”

The Salvation Army will have a presence in recovery centres being set up across Townsville, including what’s being called a “mega-hub”at Townsville Stadium.

The Salvation Army will now work with other agencies to provide financial support, counselling and case management to support each individual and family on their journey of recovery. 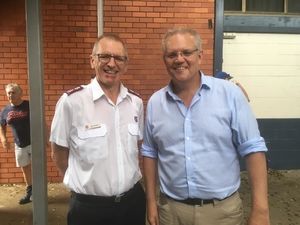 Earlier this week, Lieut-Colonel Godkin met Prime Minister Scott Morrison, who was touring flood-affected areas. “He was the local member when I was at Menai Salvation Army [in southern Sydney] and he spotted me and came over and shook my hand and thanked me for what The Salvation Army is doing.”

Today, The Salvation Army held a media conference in Townsville to officially launch its emergency appeal in partnership with Woolworths. As well as The Salvation Army’s immediate release of $1 million to the front line to assist flood-affected residents, Woolworths has donated $250,000 and the Queensland Government has committed $50,000.

Local Salvation Army personnel and volunteers had another well-deserved rest today, while Salvation Army Emergency Services (SAES) teams from areas such as Fassifern, Caloundra and Gladstone manned evacuation centres. A team from Cairns is expected to arrive in Townsville tomorrow.

“They’ve been brilliant, everyone’s just been amazing. The Salvation Army here has a great relationship with the other agencies ... it’s like one big family here, we’re all working for the same purpose,”said Lieut-Colonel Godkin.

Stories are starting to emerge from interactions with people who stayed in the evacuation centres. Townsville Faithworks Salvation Army soldier Zoeanne Elliott visited an evacuation centre with her children from Friday to Monday, armed with a bunch of board games.

“Having three children at home bored and with an undefined time frame of when they were going to be going back to school, we armed ourselves with a game of Cluedo and we went to an evacuation centre,”she said. It didn’t take long before her children had befriended the kids at the centre and they were playing happily while Zoeanne was able to chat, listen and care for the parents.

“Families were uncertain of what they were going back to,” she added. “One family had the lower storey of their house completely affected. They’ve got cupboards floating in water, there’s going to be sewage in the water, so the house is unliveable for some time. Every emotion that you could think of was there because nobody knew what was happening.”

Zoeanne couldn’t assist full-time with the SAES team, even though she is trained to do so, because she had her children with her. But the simple act of attending the evacuation centre every day with board games and a willingness to hold babies, listen to stories and assist where she could, was her way of showing God’s love.

“What’s come out of it is a friendship [with some families] that was forged out of one of the most tumultuous times of their life.”