Find out more
You are here: Home › About Us › News & Stories › Disasters Other Appeals › Bushfire Crisis Continues Catastrophic fires remain a threat across much of NSW and Queensland.

Alex Harper from Nymboida, NSW, is grateful to be alive after his home was destroyed in a “phenomenal” firestorm that swept through his property on Friday, 8 November. While trying to defend his home, Alex and a friend were forced to take shelter on his property as the immense fire came over.

“My mate and I sheltered in the cellar, which was a safe-haven for about 10 seconds,” he says. “But […] within three to four minutes the windows exploded, the back door blew out and the house started collapsing.”

As his house crumbled, Alex and his mate had no choice but to jump in his car and travel a smoke-cloaked road to an evacuation centre in Grafton.

In NSW over a million hectares of land has burned with more than 400 homes destroyed and six lives tragically lost. Queensland has experienced more than 2000 bushfires since the beginning of September.

“Unless we get significant rainfall, this fire is expected to burn for weeks. It won’t stop until it rains, or everything is burnt out,” says Adam Cole, State Coordinator for The Salvation Army, Queensland Strategic Emergency and Disaster Management.

In other parts of the country, firefighters and residents remain on high alert after extreme fire weather conditions in the last 72 hours. Firefighters have been battling blazes in South Australia, Victoria and Tasmania with most being contained.

Authorities continue to urge those in high fire-risk areas to evacuate well before there are signs of fire.

The Salvos on the ground to help Many people, like Alex, have taken refuge at evacuation centres during and after the fires until they are able to return home. The Salvation Army Emergency Services (SAES) has been activated in multiple locations across NSW, Queensland and South Australia. The SAES provides support and meals to evacuees, firefighters and other emergency personnel.

“At the evacuation centre the Salvos have fed us, we’ve got some vouchers, some work clothes, and some good moral support. They’ve been wonderful. It’s been good being able to talk to people and not having to worry about cooking and getting meals,” says Alex.

At another centre in Taree, NSW, Brian and Karen Nixon are thankful they evacuated their home early after hearing a warning over the radio. While they were able to quickly pack up some belongings, collect their dog, and move to a safer location, their home was destroyed.

“We heard that our home was burnt out, and even had photos sent to us so we knew what to expect,” says Brian. “There was only a bit of our bedroom not burnt, so I could get a few clothes full of ash, but everything else was gone.”

In it for the long haul 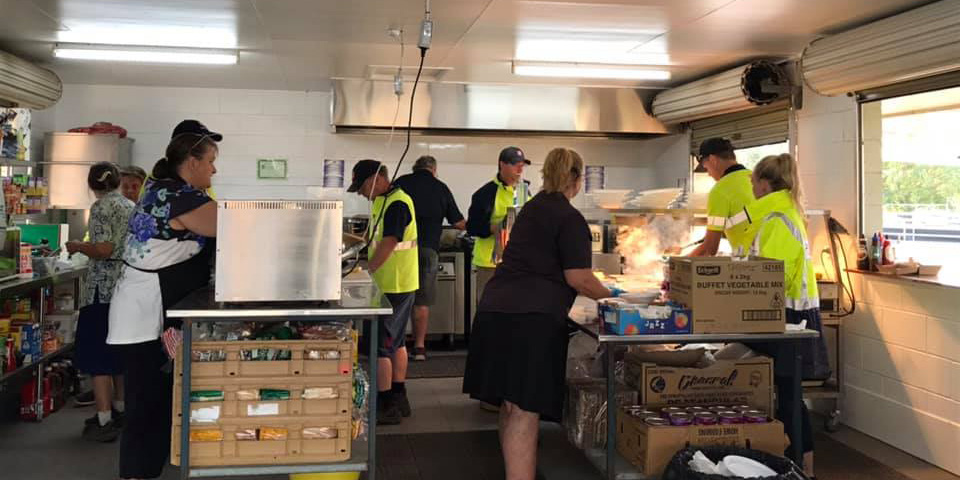 While the SAES remains active at evacuation centres attending to the immediate need, ongoing support is required for those affected by the fires for many months to come.

“Our involvement in evacuation centres and recovery hubs has enabled community recovery staff to provide referrals for people who have lost everything, people experiencing extreme hardship and an early connection to those in need,” says Adam.

The Salvation Army is committed to walking alongside those affected by disaster for as long as it takes to see healing and recovery.

The Salvation Army offers a range of services and assistance measures to help people who have been impacted by bushfires including:

For enquiries, The Salvation Army Disasters Assistance team can be contacted by emailing sal.disasters@salvationarmy.org.au or by calling 1300 662 217

The Salvation Army is working with State and Local government to determine the best way to provide support to affected communities. Information on this page will continue to be updated as it becomes available.

You can give hope to Aussies facing bushfires across the country. Support The Salvation Army Disaster Appeal.